A word my mother says often is cattywampus. It isn’t typically used in the Midwest, at least not in these parts, Iowa, and not in that form. My dad, my brothers, and I don’t use it. If it once was more common, it has since gone by the wayside.

My mother’s family are Hoosiers from Kentuckiana, the heart of the border region of the Upper South and Lower Midwest (and, I might add, the boyhood home of Abraham Lincoln, along with being a major contested region of the Civil War for both strategic and symbolic reasons). Maybe she picked up that word from her family whose ancestry for for generations was in Southern Indiana and for centuries was in the Upper South, but she doesn’t remember it from her childhood. Otherwise, she might’ve heard it when living in South Carolina, although less likely because that was well into her older adulthood.

What a strange word. It has several basic meanings—the main definition being: misaligned, uncentered, crooked, askew, indirect, on-a-bias, on the opposite corner, diagonal, oblique, slanted, awry, out-of-sorts, crazy, chaotic, unexpected. Where did it come from? “Not only the pronunciation but also the vocabulary of the England’s North Midlands became part of American midland speech. In the word lists of Cheshire, Derbyshire, Lancashire and Yorkshire we find the following terms, all of which took root in the Delaware Valley: […] catawumpus for a come down” (from Erenow, Delaware Speech Ways: English Origins of the American Midland Dialect) There are a few possible etymological origins and influences, as explained by Wiktionary (cater-corner):

cater- +‎ corner, where cater- is of disputed origin. Liberman argues that this is a prefix meaning “crooked, angled, clumsy”, of North Germanic origin; compare cater-cousin.[1] The verb cater ‎(“move diagonally, place diagonally, cut diagonally”) is attested from 1577 (Liberman proposes this as a backformation from cater-), and in 19th century Lancashire dialect, cater-cornered refers both to stone blocks that are out of square, and people who walk twisted (with one side in front of the other), especially if partially paralyzed.[1] Further awkward and clumsy are of Scandinavian origin, and Old Irish cittach ‎(“left-handed, awkward”) is cognate to cater- words, also suggesting a Scandinavian origin.

A commonly proposed etymology (proposed in the 19th century) derives cater, from French quatre ‎(“four”) (hence “four corner” – at the opposite corner of a square), and similarly cater-cousin from “fourth cousin”, while Liberman rejects this as implausible – similar terms from French are simply calqued as “four corners” (as in “four corners of the world”, from French “les quatre coins du monde”), the English term cater ‎(“four”) (from French) was primarily used in dice, the domestication of a specialized foreign term as an adverb for “across” seems implausible, there are many Germanic terms that appear to be cognates, and other terms with cater- are found in English dialects.[1]

caterpillar and caterwaul are unrelated (derived from cognates to cat), but may have influenced the pronunciation of earlier *cate- (later cater-), or undergone similar sound changes.[1]

I also saw catawampus used as a synonym for rumpus: a noisy disturbance; a commotion. In “The Sad Tale of Three Slaves” retold by M. A. Jagendorf (From Sea to Shining Sea by Amy Cohn) the word is used in this way (p. 139): “When they were gone, Squire Brown put the fugitives in a hut on his own grounds where they would be safe until the catawampus was over.” The rarely used catarumpus might be related. Using catawampus in this way could be its having picked up the meaning of Scottish wampish: to wave about or flop to and fro. Wampish, like catawampus, originated as early 19th century slang.

It seems that catawampus began to be used later than wampish, by maybe a decade or two. Wampish appeared between 1810 and 1820. It was in the decades following that catawampus came on the scene. According to Dictionary.com:

Earliest use seems to be in adverbial form, catawampusly (1834), expressing no certain meaning but adding intensity to the action: “utterly, completely; with avidity, fiercely, eagerly.” It appears as a noun from 1843, as a name for an imaginary hobgoblin or fright, perhaps from influence of catamount. The adjective is attested from the 1840s as an intensive, but this is only in British lampoons of American speech and might not be authentic. It was used in the U.S. by 1864 in a sense of “askew, awry, wrong” and by 1873 (noted as a peculiarity of North Carolina speech) as “in a diagonal position, on a bias, crooked.”

The meaning of the word began changing fairly quickly. It took until the Civil War era for it to get the main meaning it still has. That era, after all, was when the world went catawampus and was never the same again.

One can sense other words feeding into this slangish milieu. The use of catawampus as fierce resonates with its use as hobgoblin. It maybe links to another word, catamount—“Shortened from catamountain, from cat o’ mountain, cat of the mountain.” A catamount is a “A wild animal of the family Felidae, especially cougar, puma or lynx.”

Catamount could have been incorporated into catawampus for different reasons. There is the similarity of how the words sound. Also, wild cats are known for hunting in an indirect and sneaky manner, often their prey not seeing or hearing them coming. And, no doubt, large cats have a reputation for being fierce.

It is interesting how catawampus can be used as a noun. In that case, it refers to “A fierce imaginary animal, a bogeyman.” That seems to relate to a catamount, albeit made into a monster. This was posted at The Phrase Finder—Re: CATTY-KEY-WAMPUS:

Still another sense of ‘catawampus’ and ‘catty wampus’ was common in some sections of the antebellum South. It meant goblin, sprite or, sometimes, fearsome beast. Slaveowners were known to warn slaves they thought might be planning to run away that ‘catawampus cats’ were lurking in wait for them. They sometimes also made fearsome noises in the night, which they claimed were the bloodthirsty roars of the catawampus cats.'” (The “Morris Dictionary of Word and Phrase Origins” by William and Mary Morris, HarperCollins, New York, 1977, 1988.)

That is where it gets even more interesting. A wampus cat comes from American folklore:

The wampus cat is often compared to the “Ewah” of Cherokee mythology, in that it was a woman who disguised herself in the skin of a cougar to spy on the men of the tribe, as they sat around the campfire with their wolf brothers, and told sacred stories on a hunting trip. When the woman was discovered, the tribe’s medicine man punished her by transforming her into a half-woman, half-cat, who supposedly still haunts the forests of East Tennessee.[1] The range of this creature has been tracked into the Carolinas as well. [2]In folklore, it can be seen as one of a number of fearsome critters. In some sections of rural East Tennessee, the legend of the Wampus Cat takes on a more sinister tone. It is said that the Wampus Cat is a spirit of death and the earth, and when her cry is heard, it means someone is going to die and be buried within the next three days.

Going back enough generations and my mother’s family does have some roots in Tennessee. I did notice that an Indiana high school in Cambridge City has a wampus cat as a mascot. Going by one source, it did become part of local Hoosier folklore. Ronald L. Baker, in Hoosier Folk Legends, writes that (p. 122, entry “129. The Wampus”):

The first time that I heard about this I was about 14 years old. I listened to old folks at a country store tell of the scream of a wampus cat. Their tale was that this cat was the size of a panther, which was quite large for southern Indiana. According to their tale, this cat made its home along the banks of the Wabash and Erie Canal. They said that in the building of the Wabash and Erie Canal the laborers came upon the body of a young girl, 19 or 20 years old, with her throat ripped out as though done by a huge cat. They said that there were tracks around the girl’s body. They said that this girl’s soul went into the body of this cat. This is true . . . what I was told. On special summer nights similar to the one the girl died you could and still can hear her screaming.

That is a different version of the Cherokee story. Both involve a woman turning into a large wild cat and haunting the menfolk. When my mother was recently using the word, I remembered I’d heard it used by Cormac McCarthy in The Orchard Keeper (pp. 59-60):

She told him that the night mountains were walked by wampus cats with great burning eyes and which left no track even in snow, although you could hear them screaming plain enough of summer evenings. Ain’t no sign with wampus cats, she told him, but if you has the vision you can read where common folks ain’t able.

The wampus cat is a liminal figure, a hybrid monster, a shadowy being. This is particularly true in its role as a shamanic shapeshifter of sorts, an eternally trapped human soul in non-human form. It is an unnatural, abnormal creature. Fierce and frightening. One might call it catawampus. And the consequences of meeting such a creature would mean being “catawamptiously chawed up” so as “to be completely demolished, utterly defeated” (Bartlett Dict. Amer. as quoted by OED).

Moral of the story: You don’t want to get into a catawampus with a wampus cat. Or else your death throes will be wampish, leaving your corpse in a catawampus arrangement. I say that catawampusly, with utter seriousness. 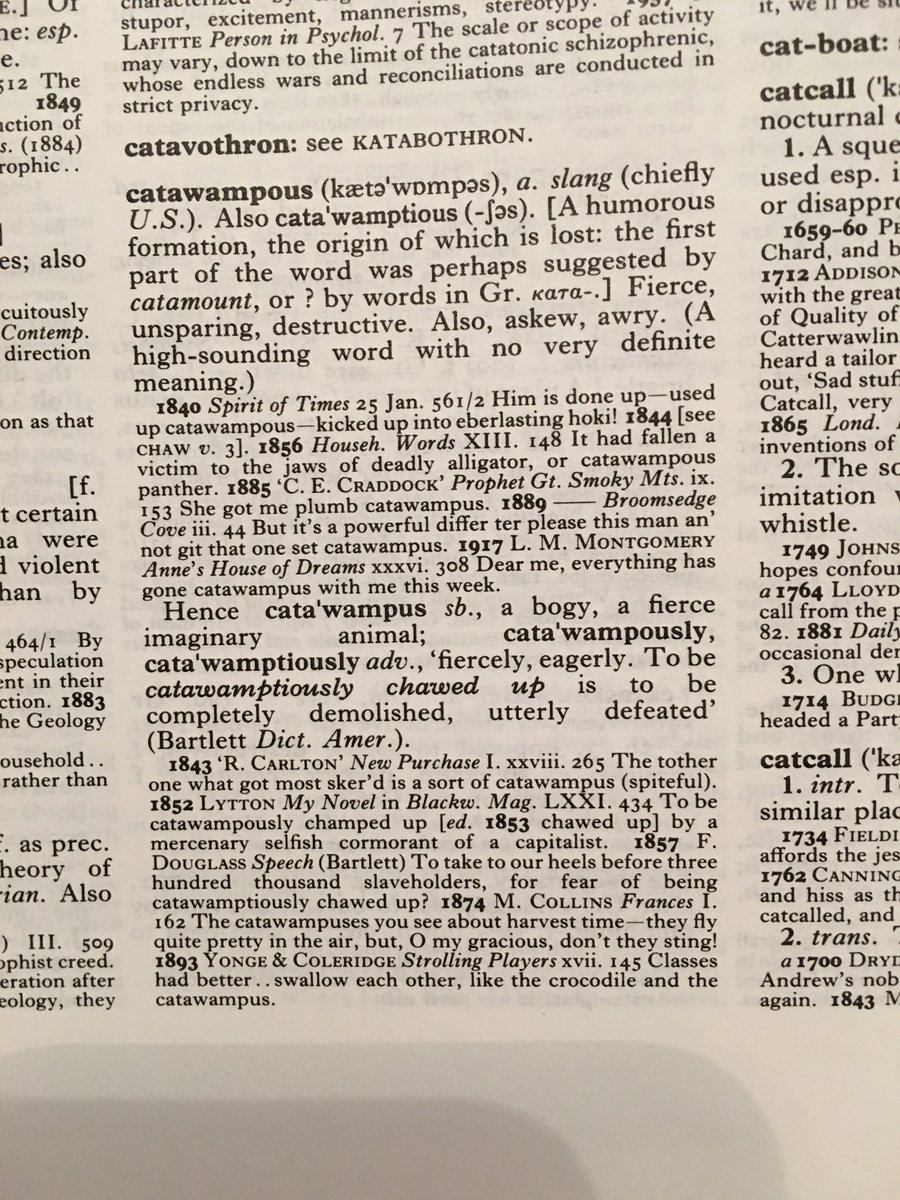