As I’ve written about lately, there is something unique about a low-carb, high-fat diet. People feel better and have more energy. Diverse symptoms disappear, including from serious conditions that for some people are reversed, from autoimmune disorders to mood disorders. That is particularly true in the context of exercise, calorie restriction, fasting, OMAD, ketosis, autophagy, etc and when combined with traditional foods, paleo, carnivore, etc. Many have experimented with this area of dietary changes and have observed major improvements, but it isn’t always clear exactly what is causing any given improvement.

We do understand certain things well. I’ve already discussed in detail ketosis and related factors. And there has been more info coming out about autophagy, an even more fascinating topic. There is the signaling in relation to mTOR, IGF1, and AMPK. And there are the hormones that deal with hunger, satiety, and fullness. Everything is context-dependent. For example, the carnitine in red meat can be turned into carcinogenic TMOA by the Prevotella gut bacteria, but that is a non-issue as long as you aren’t eating the grains that feed Prevotella in the first place. Or consider how vitamin C deficiency that leads to scurvy is rare on carnivore diets, even though vitamin C is found in such small amounts in animal foods, since on a low-carb diet the body needs less vitamin C. Issues with gut health, inflammation, and neurocognition are also more clear in explanation as they’ve received much scientific attention.

Other results are more anecdotal, though. This is largely because the research on low-carb, high-fat diets has been limited and in many cases, such as with zero-carb, scientific evidence is even more sparse. But what thousands of people have observed remains interesting, if yet not entirely explained. Many LCHF dieters have noted that their thoughts are less obsessive and compulsive, something I’ve argued has to do with eliminating addictive foods from the diet, especially added sugar and grains. An example of this is decrease of intrusive sexual thoughts reported by some (and less distraction in general), although at the same time some also state decrease in erectile dysfunction (the latter being unsurprising as the LCHF diet are causally linked to hormonal functioning and cardiovascular health). Sexuality definitely is changed in various ways, as demonstrated in how early puberty becomes common when populations switch to agriculture with high amounts of carbohydrates, in particular grains, and maybe dairy has something to do with it as well since dairy triggers growth hormone — maybe why agricultural societies were able to outbreed hunter-gatherers, overwhelming them with a continually growing supply of cheap labor and cheap lives to send off to war.

There are some confounding factors, of course. Along with more nutrient-dense foods with an emphasis on fat-soluble vitamins, people going on various kinds of low-carb diets also tend to increase cholesterol, saturated fat, and omega-3s while decreasing omega-6s. Cholesterol is one of the most important substances for brain health and it helps your body to process vitamin D from sunlight. Saturated fat is a complicated issue and no one fully knows the significance, beyond our knowing the fear-mongering about it appears to be no longer valid. As for omega-3s, they are essential to so much. The main problem is that omega-6s are at such a high level in the modern diet that they are inflammatory. In using healthier oils and fats, most low-carbers eliminate vegetable oils in junk food and in cooking with vegetable oils being the main source of omega-6s.

This could explain why some think sunburns are less common on a low-carb diet (read down through the Twitter comments). It may or may not have anything specifically to do with carbohydrates themselves and, instead, be more about the general eating pattern common among low-carb dieters. This might have to do with oxidation and free-radicals in relation to omega-6s. Or it could have something to do with fat-soluble vitamins or dietary cholesterol that is typically greater in low-carb, high-fat diets. There are similar patterns in multiple areas of dietary changes and health, and they indicate something that can’t be explained by mainstream health ideology. Consider how Americans have experienced worsening health as they have followed expert opinion in eating more vegetables, fruits, whole grains, and vegetable oils while decreasing red meat and saturated fat. Americans have been following expert advice from mainstream institutions and from their doctors. The same kind of thing has happened with people protecting themselves against sun damage. Americans have increased their use of sunscreen while spending less time in the sun, as they were told to do. What has been the results? The skin cancer rate is going up and those avoiding the sun are less healthy. Is it a mere coincidence that the intake of omega-6s was also increasing during the same period? Maybe not.

When the actual causes are determined, we can isolate them and re-create the appropriate conditions or mimic them. This is biohacking — Siim Land is great in explaining how to get particular results based on the scientific evidence. If omega-6s or whatever is the problem behind sunburns, then it’s far from being knowledge of value limited to the low-carb community. Omega-6s haven’t been as clearly on the radar of many other diets, but health issues with omega-6s are already well known in the scientific literature. So, the advantages in this case might be attained without restricting carbs, although we don’t know that as of yet, assuming the anecdotal observations are proven valid. The interaction between omega-6s and carbohydrates might be a total package, in terms of pushing the body more fully into an inflammatory state where sunlight sensitivity becomes an issue. All we can do at the moment is offer hypotheses to be tested in personal experience and hopefully soon in scientific studies.

There are other arguments for why a specifically low-carb diet could offer sunburn protection, as explored by Keir Watson in Animal Products That Protect You From UV Damage. This is particularly true when we are talking about a paleo or similar diet with plenty of fatty animal foods. Along with omega-3s, saturated fat might play a role: “A higher saturation index should be protective against free-radical damage, suggesting that more saturated fat in the diet might be good, but the evidence I found was not very strong.” More research will need to be done on that possibility. Even if saturated fats simply replace omega-6s, they will be beneficial in this area of health. Another thing to consider is creatine, plentifully found in meat and fish, that “has marked protective effects against oxidative stress and UV-induced damage in the skin, including protecting mitochondrial DNA.” The last thing brought up by Watson are antioxidants, although typically associated with plants, are also found in animal products: “Lutein and zeaxanthin (from egg yolk),” “Astaxanthin found in wild salmon, krill, lobster and crab,” “retinol (vitamin A from animal source, e.g. liver),” and vitamin D from “oily fish – salmon, mackerel, herrings and sardines – the very same fish that give you the protective omega-3 fats!”

The body is a complex system. Change even a single factor and it can have cascading effects. But change multiple factors and the entire functioning can shift into a different state, altering numerous areas of health. Many of the results will be unpredictable based on present science because most research up to this point has had a narrow focus in the population being studied, almost entirely those on the Standard American diet and variations of it. What is true for most people following the past half century of health advice won’t always apply to those following entirely different diets and lifestyles. It’s not that LCHF is going to heal all that ails you, but we find ourselves at a rather fascinating point in the views on diet, lifestyle, and health. We are coming to realize how profoundly affected is the body and mind by even some minor changes. We have more hypotheses at present than knowledge, and that isn’t a new situation. So much of what we thought we knew in the past, the basis of mainstream ideology of health experts, were largely untested hypotheses when first advocated and much of it remains unproven.

Now it’s time to get serious about exploring these other glimpses of entirely different possibilities of understanding. That is the point of hypotheses that often begin as observations and anecdotal evidence.

Isocaloric feeding of diets varying in lipid content to albino hairless mice has shown that their susceptibility to skin tumorigenesis induced by simulated solar UV light was not affected by the level of polyunsaturated fat, 5% or 20%. However a qualitative effect of dietary lipid was demonstrated. Mice fed 20% saturated fat were almost completely protected from UV tumorigenesis when compared with mice fed 20% polyunsaturated fat. Multiple latent tumours were detected in the saturated fat‐fed mice by subsequent dietary replenishment, suggesting that a requirement for dietary unsaturated fat exists for the promotion stage of UV‐induced skin carcinogenesis. 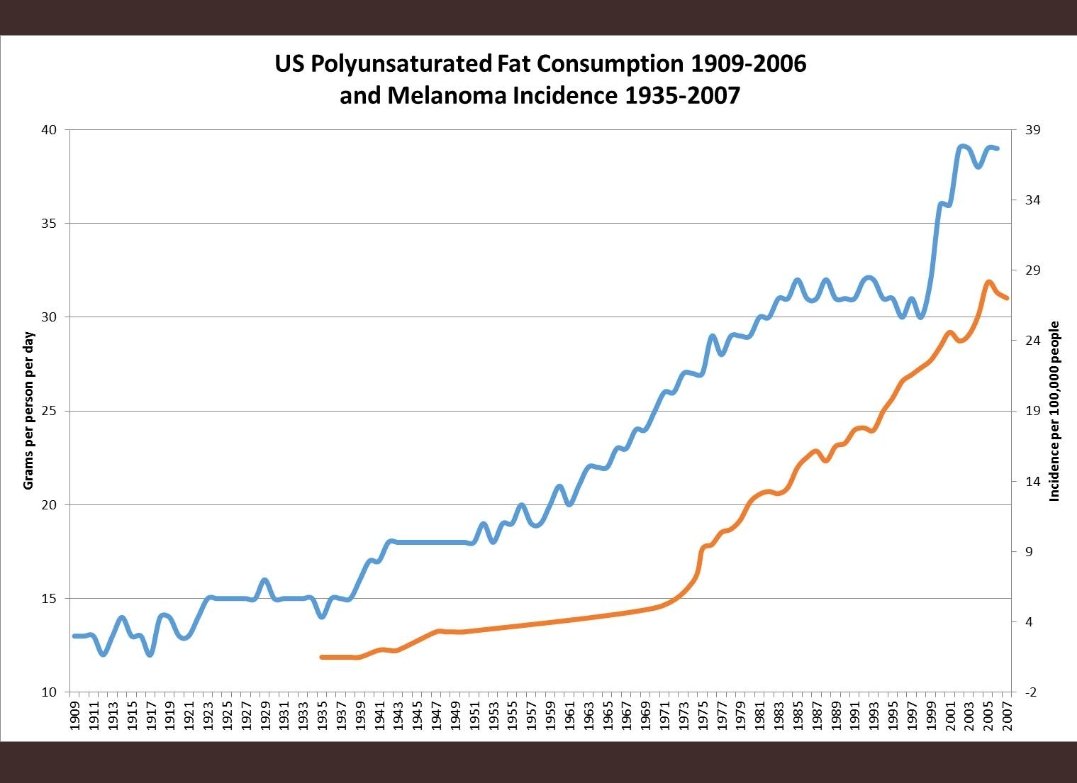 Is Sunscreen the New Margarine?
by Rowan Jacobsen

N=Many on Omega-6 and Sunburn: Can Sunburn be Reduced?
by Tucker Goodrich

Don’t Blame it on the Sun!
by Dawn Waldron

Why I Don’t Use (Or Need) Sunscreen
by Tom Naughton

One thought on “Does a Healthy LCHF Diet Protect Against Sunburns?”